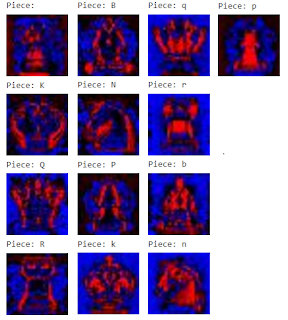 Let's train a tensorflow neural network to tell what piece is on a chess square. In the previous post discussed how to parse input images which contained a chessboard into 32x32 grayscale chess squares. Let's look again at our input and outputs.

How do we generate training data where we know the labels? One way is to take screenshots of the starting chessboard position, where we know exactly where all the pieces are supposed to be. I went ahead and took around 14 screenshots of lichess.org starting positions for a few themes and piece sets. This gave us around 900 tiles (64 tiles per image) to train with. It was a bit limited but it's enough for a basic classifier.

We followed the MNIST tensorflow tutorial almost verbatim, building a simple classifier, you can follow along directly from the IPython notebook as well, or continue with the summary below.


Our inputs are 32x32 normalized grayscale images, which we unroll into a 1024 length vector of floats. Our weight matrix is a fully connected matrix multiply of a 1024 x 13 array, 13 being the length of the output vector of probabilities associated with each piece. We then define a cross_entropy variable which is based on the difference between our expected label vector and our predicted vector of probabilities. We use Gradient Descent to minimize this value, amazingly tensorflow simplifies this to a single line!

We can then train our model and test it's accuracy on a testing dataset we kept separate from teh training dataset:

99.6% accuracy, that's pretty impressive, but less impressive when we realize we're only testing it against a testing dataset we collected, from the same sites we built our training dataset on. In the real world with images from other sites, this classifier has and will fail much more often.

Let's visualize our weights to get a sense of how the classifier is looking for each piece:

Awesome! We're able to see a concept of what the neural network is looking for in each of the pieces. We can wrap this together into a prediction suite, where we pass in an image url, we use CV to break up the screenshot into input tiles, the neural network predicts each piece for the 64 tiles, which we then compile into a single board layout in FEN notation.

And let's try it out! All the boilerplate is done, the model is trained, it's time. I chose the first post I saw on /r/chess with a chessboard and an image url:
A great success on the first prediction. It was able to handle the highlighting on the pawn movement from G2 to F3 also. The reason it worked so well here is this image url is to a screenshot of a lichess image, a piece set and theme we have trained for, so it's reasonable to expect success here. Fantastic, a perfect match!

Now just for fun, let's try an image that is from a chessboard we've never seen before! Here's another on reddit:

Hah, it thought all the pawns were bishops. This is a good example of where our training dataset does not encompass enough variations in piece themes, though it was nice to see that the network was able to predict several other pieces and all the blank squares successfully, very nice.

In the next post I discuss improving our neural network by building a larger dataset, as well as making the jump to a larger convolutional neural network, which is most definitely overkill, but quite fun.

For a sneak peek of the final product, check out the repository on Github
ipython notebook machine learning python tensorflow